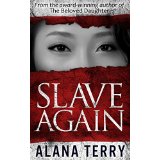 Slave Again by Alana Terry is a fantastic read!!  There aren’t enough words to express the incredible story within its pages. Although it is the book following The Beloved Daughter, it is a stand alone story.

Ms. Terry touches on the crucial roles of women even in oppressed societies. Through the stories of three women, she intertwines a tale of espionage, human trafficking, and rescue. In Slave Again, survival and strength are just among a few of the lessons.

Mee-Kyong has been through a nightmare of a life and now survival is her motivator. The man she has given her heart to has become not only her lover, but her enemy. She must decide between survival and loyalty to him. Although he rescued her from prison, he has in fact, imprisoned her again in a life with him. But Mee-Kyong has lived in the chasm between heaven and hell and she will do whatever it takes to survive…including murder.

Sun is a sweet, innocent girl who wants to help her family. She’s persuaded to find work but her persuader is an evil man with nothing good on his mind, especially for her. Taken from her simple but poor home life she is promised a better future and one that will help her family as well. Willingly, she accepts this promised future not realizing the danger she has placed herself in.

Roger and Juliette are Americans who have a heart for rescuing the improvised they see all around them. Without purpose, Juliette finds depression too close a companion. Determined to help spread the gospel, they work together to teach the people they rescue. Once they’ve completed their training they are sent out as lambs among wolves. Doing all they can to make a difference in the world, they willingly accept danger as part of their daily lives for the sake of the gospel.

Three very different stories that become intertwined in a tale so suspenseful, the reader will not want to put the book down. Alana Terry is a writer with not only great storytelling ability, but a heart for the innocent ones caught in a war and a world filled with devastation and destruction. Definitely a must read!

I received this book from Alana Terry in exchange for my honest opinion which I’ve provided here.

This site uses Akismet to reduce spam. Learn how your comment data is processed.