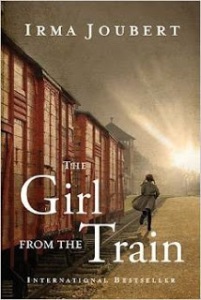 Six-year-old Gretl Schmidt is on a train bound for Auschwitz. Jakób Kowalski is planting a bomb on the tracks.

As World War II draws to a close, Jakób fights with the Polish resistance against the crushing forces of Germany and Russia. They mean to destroy a German troop transport, but Gretl’s unscheduled train reaches the bomb first.

Gretl is the only survivor. Though spared from the concentration camp, the orphaned German Jew finds herself lost in a country hostile to her people. When Jakób discovers her, guilt and fatherly compassion prompt him to take her home. For three years, the young man and little girl form a bond over the secrets they must hide from his Catholic family.

But she can’t stay with him forever. Jakób sends Gretl to South Africa, where German war orphans are promised bright futures with adoptive Protestant families—so long as Gretl’s Jewish roots, Catholic education, and connections to communist Poland are never discovered.

Separated by continents, politics, religion, language, and years, Jakób and Gretl will likely never see each other again. But the events they have both survived and their belief that the human spirit can triumph over the ravages of war have formed a bond of love that no circumstances can overcome.

The Girl from the Train is a powerful story of tragedy, triumph and love that over comes it all. It captivated me from the beginning and little Gretl Schmidt, stole my heart.

WWII is in full force and Hitler’s evil has begun destroying lives. Through it all a little girl is caught up in the storm. When her wise grandmother manages to force her off of the train bound for Auschwitz, Gretl finds herself alone, afraid and at the mercy of whomever she should come across first.

Jakób Kowolski is determined to fight for the cause of his country but finding a lost little girl changes the course of his life and he finds himself wanting her protection more than anything.

This story is beautifully written and packed full of great quotes. One of my favorites is:

Once, when she told Jakób how she felt about stations, he said, “A station is just the beginning or the end of the destination, Gretz. It’s how you yourself feel at the station that makes it a happy or sad place.”

It’s almost always sad, because people go away,” she persisted.

“But at the other end they arrive at a new destination, and that’s good.”

“Sometimes.” She was thinking of the ghetto and of Auschwitz.” (Pg. 81)

Passed from one person, one house, and one name change to another, Gretl Schmidt eventually becomes Grietjie Neethling and through her sorrowful journey of saying goodbye to those she loves, she eventually finds acceptance and love in a family to call her own. But her longing for Jakób never ceases.

My heart broke for little Gretl as she is left behind repeatedly. Unwanted, unloved and rejected by so many…all because of her race. Yet, her courage is undaunted.

I love historical fiction and have read many books set in this time period but this was the first time I’d ever heard of orphan children being sent to Africa. So along with a great story, I got a history lesson.

This book will leave you satisfied because in it, there is comfort and courage. There is joy and sorrow. There is a confidence that love conquers all.

I received this book from The Fiction Guild and Thomas Nelson Publishing in exchange for my honest review which I’ve provided here.

This site uses Akismet to reduce spam. Learn how your comment data is processed.